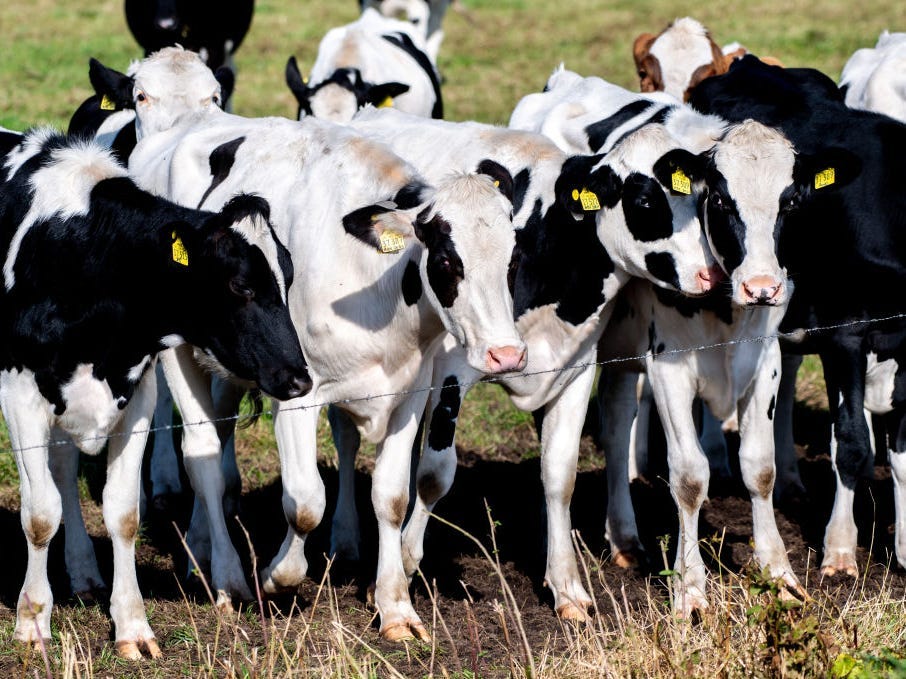 Danone said the dairy industry alone contributes about 8%, according to its own analysis of public data that was reviewed by scientists at the Environmental Defense Fund.

This article is part of Insider’s weekly newsletter on sustainability, written by Catherine Boudreau, senior sustainability reporter. Sign up here.

Danone this week promised to cut methane emissions across the farms supplying its milk by 30% by the end of the decade.

The dairy giant, known for brands like Activia and International Delight, is the only food-and-agriculture company to align itself with the Global Methane Pledge, an initiative signed by 150 countries at the United Nations’ climate summit in 2021.

World leaders rallied around tackling methane in recent years, in part because doing so is one of the quickest ways to slow the climate crisis. The potent greenhouse gas has 80 times the planet-warming power of carbon dioxide, at least in the short term. Methane lasts only about a dozen years in the atmosphere, whereas carbon dioxide accumulates over centuries.

A UN-led study published in 2021 found that methane emissions were on the rise and that the majority were created by human activities such as producing oil and gas and farming. Satellite technology is making it easier to detect methane leaking into the atmosphere.

Cow burps, manure pits, and fertilizers make agriculture the top source, accounting for 40% of man-made methane emissions, the study found. Danone said the dairy industry alone contributes about 8%, according to its own analysis of public data that was reviewed by scientists at the Environmental Defense Fund.

As with most food companies, nearly all of Danone’s carbon footprint is created along its supply chain from farm to plate, known as scope 3 emissions. Chris Adamo, Danone’s vice president of public affairs and regenerative-agriculture policy, said there are a few ways dairy farms can reduce methane: breeding cows for ideal genetics; changing how herds are cared for and fed; and better managing manure.

Danone, which works with 58,000 dairy farmers across 20 countries, piloted some projects between 2018 and 2020 and said it saw a 14% cut to methane emissions. Those gains won’t count toward Danone’s new pledge, which will be measured against a 2020 baseline, Adamo said.

He declined to say how much money Danone is investing in the initiative. But the company is searching for new ways to finance costly changes on farms. Anaerobic digesters, which capture manure and convert it into biogas to be sold off as a low-carbon fuel, can cost millions of dollars. New additives for cow feed meant to reduce methane from cow burps also come with a high price tag, Adamo said.

That’s where a partnership with the Environmental Defense Fund comes in. The nonprofit plans to work on pairing private and public dollars and encouraging more companies and governments to adopt methane policies for agriculture.

There is already some momentum. As of December, the US Department of Agriculture had invested more than $3 billion in what it calls climate-smart projects, including for Danone dairy farmers. New Zealand, the world’s largest dairy exporter, plans to tax farm emissions by 2025.

“So far, very few companies have stepped forward with a specific methane ambition,” said Katie Anderson, the director of EDF+Business’ resilient-food-and-forest program. “Danone has a big global footprint, so this is huge. But we also hope other companies will follow their lead and find solutions.”