As Ukraine attempts to secure more modern arms from its allies, it has stepped up a parallel effort to lock in financial support from business leaders in Davos to help rebuild the country.

Since Russia invaded Ukraine last year, the United States and its allies have given tens of billions of dollars’ worth of weaponry, but Kyiv is still desperate for more.

It is also keen to ride a wave of Western public support to ensure that pledges for its reconstruction, which cannot begin in earnest until the war ends and some estimate cost as much as $1 trillion, are more than just words.

But talk of rebuilding appears premature.

Analysts say the mix of donors ranging from countries to development and international organisations, private sector players or the potential redistribution of seized Russian assets has already made coordination complicated.

And the reality is that progress has been arduous.

Ukraine, which dominated the World Economic Forum’s (WEF) last big meeting in May, has again sent dozens of executives, lawmakers and decision makers with a clear message from President Volodymyr Zelenskiy: commit now, not later.

“We have to think for the day after. The whole world needs Ukraine as a democratic and successful country. It is the best answer for our friends but also our enemies. It’s our task to make it a successful country,” Kyiv mayor and former world heavyweight boxing champion Vitali Klitschko told Reuters.

“The more we do now, the less we will have to do in reconstruction,” Odile Françoise Renaud-Basso, President of the European Bank for Reconstruction and Development (EBRD), said.

The EBRD, which invested some 1.7 billion euros ($1.8 billion) in energy, transport and other infrastructure in Ukraine in 2022, nevertheless estimated that its local economy shrunk by nearly a third over the year.

A joint report in September by the Ukraine government, European Commission and the World Bank, estimated that the cost of reconstruction and recovery amounted to $349 billion (322 billion euros) and the figure is rising as war drags on.

With every Russian missile hitting critical infrastructure, the costs for reconstruction rise and investor appetite, particularly in the private sector, wavers.

For Zelenskiy, the heavy Davos presence is more than just symbolically underscoring that Ukraine remains afloat and that Russia’s one-time omnipresence in at the event is over.

It is about creating momentum and giving assurances that even during the war, Ukraine is not closed for business.

Svyrydenko said Davos was the opportunity to move from strategy to concrete projects.

“Ukraine has shown resilience in war time and business too so we have to find additional tools on how to facilitate Ukraine business to develop and foreign investment to come to Ukraine even now,” she said.

Zelenskiy addressed BlackRock executives and its clients in Davos via Zoom on Tuesday, a person who attended said. BlackRock Chief Executive Larry Fink said in Davos that private sector could help, adding he was looking for a “fair and just return”.

While BlackRock may appear upbeat, there is always the risk that war drags on for years or that when it ends like in previous post reconstruction efforts like Afghanistan, Iraq or in the Balkans, pledges and support do not materialise or money is wasted through corruption and incompetence.

“Tensions will resurface when the time comes to fund Ukraine’s reconstruction – made much more expensive by Russia’s continued attacks on Ukrainian critical infrastructure – but that won’t happen until the war ends, and the war isn’t ending anytime soon,” Eurasia Group said in its outlook for 2023.

In Davos, an exhibition at Ukraine House reminds visitors of the scale of the destruction. The venue is also the go-to place for the business elite and Ukraine’s closest backers to assess its prospects and reiterate that Ukraine cannot afford to lose the war as it heads into its first year anniversary on Feb. 24.

“What Ukraine is doing is to try to get everybody on the starting line for when they are able to start the rebuilding,” Lithuania’s Foreign Minister Gabrielius Landsbergis told Reuters.

For daily Davos updates in your inbox sign up for the Reuters Daily Briefing here. 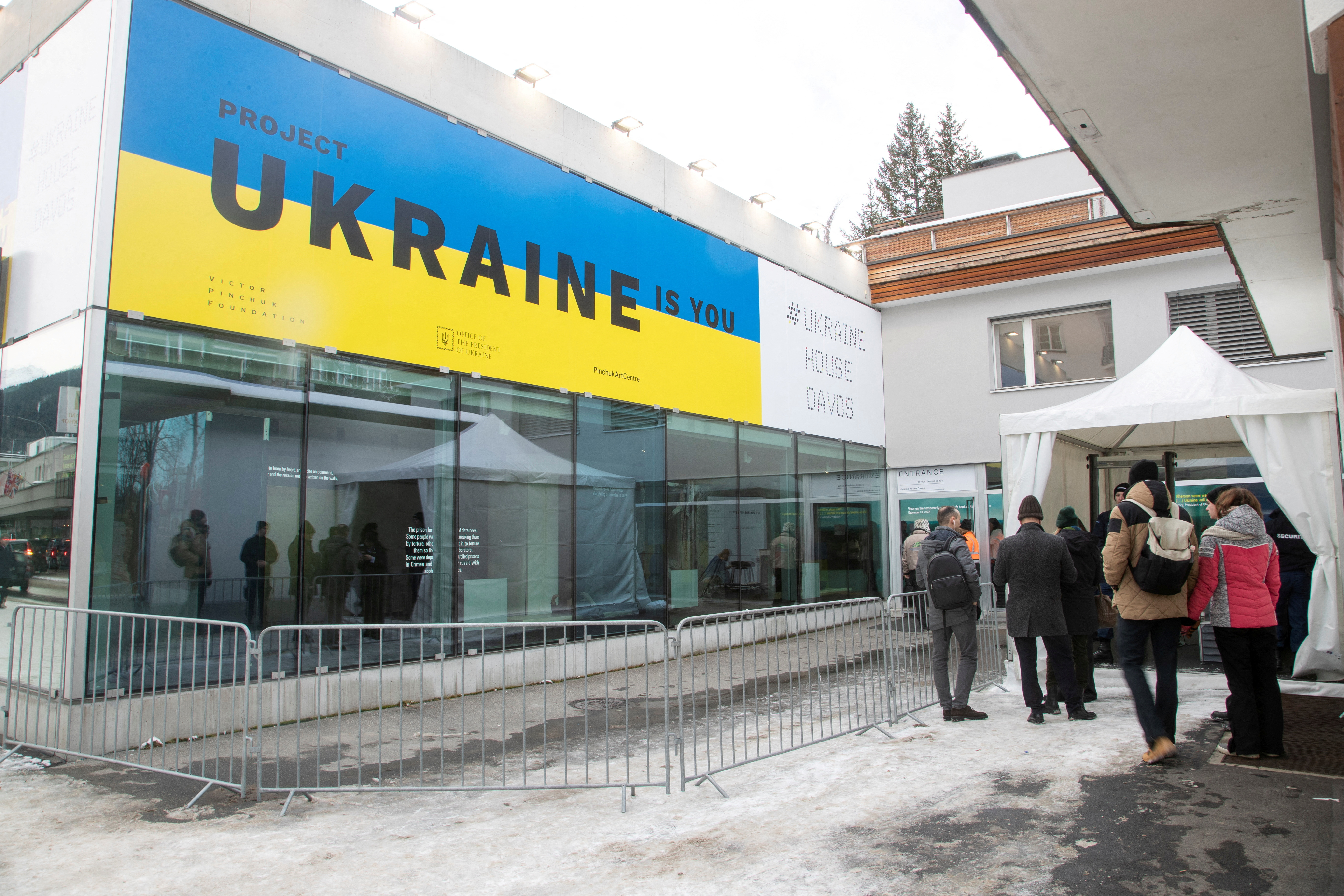 Visitors queue in front of the Ukraine House during the World Economic Forum (WEF) 2023, in the Alpine resort of Davos, Switzerland, January 16, 2023. REUTERS/Arnd Wiegmann/File Photo 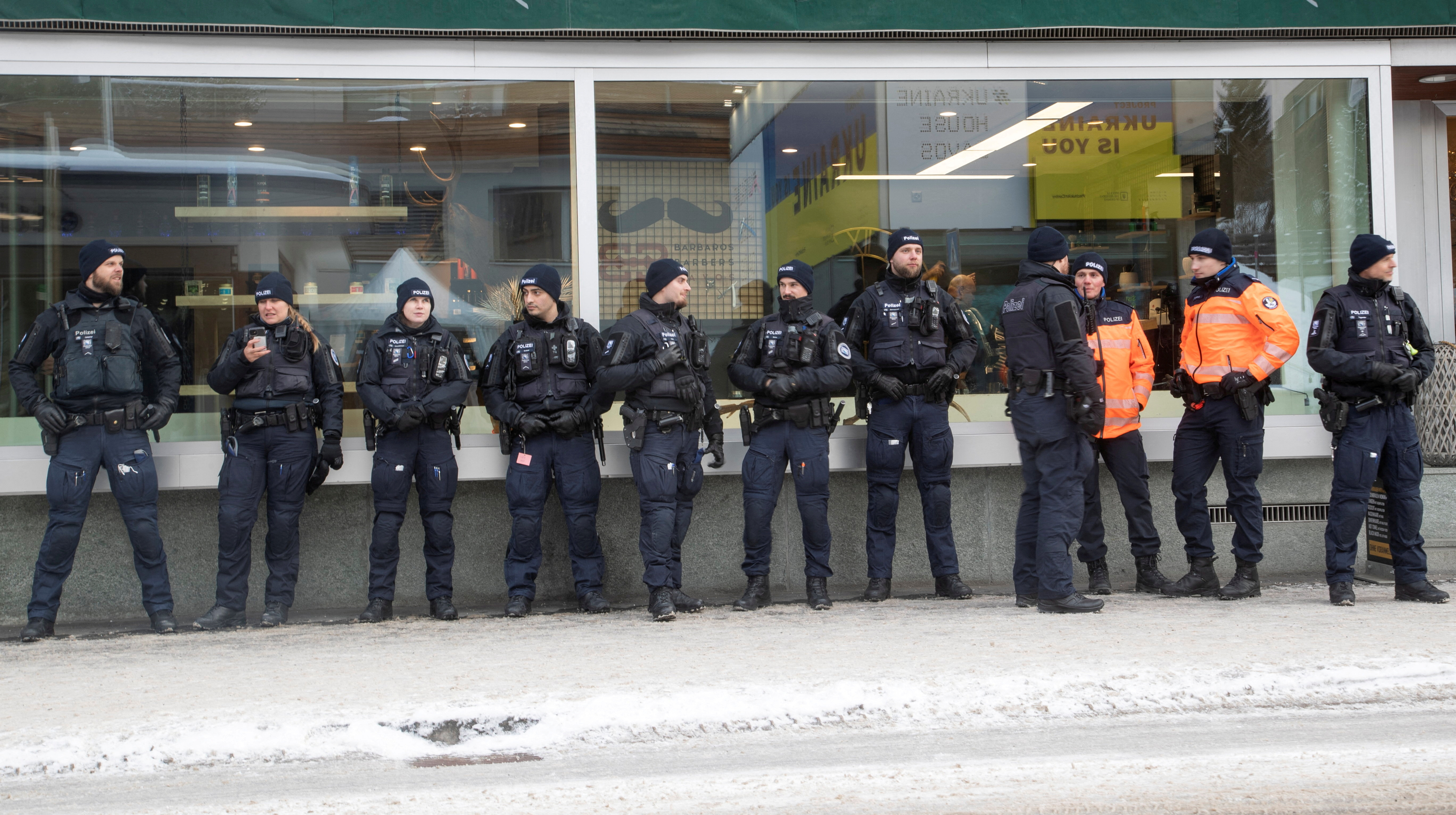 The Ukraine House is reflected in a window of a shop as Swiss police officers stand in front, during the World Economic Forum (WEF) 2023, in the Alpine resort of Davos, Switzerland, January 16, 2023. REUTERS/Arnd Wiegmann/File Photo