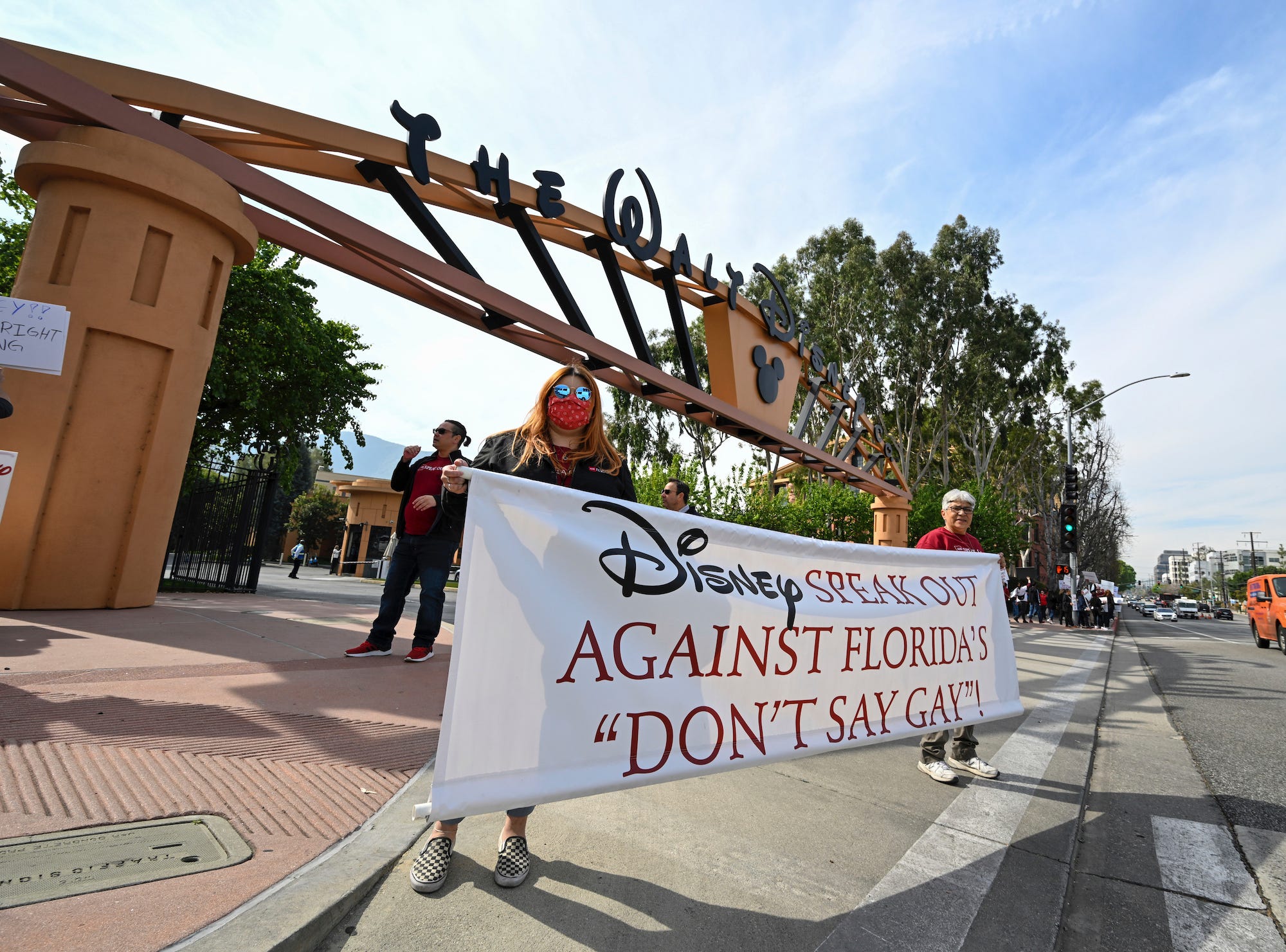 Members of the AIDS Healthcare Foundation urge Disney to speak out against the “Don’t Say Gay” bill.

A Disney exec who left the company after just over three months was given $8.37 million in total compensation, or nearly $120,000 per day, for the 70 weekdays he spent at the company.

Geoff Morrell, who had served as the company’s chief corporate affairs officer, joined Disney on January 24, 2022 and left in late April.

During his time at the company, Morrell got a $489,500 salary, Disney’s proxy statement released on Tuesday shows. He also received a $2.75 million cash sign-on bonus, $2.9 million in stock awards, and $1.2 million in option awards.

Morrell got a further $1 million in other compensation, including $527,500 in relocation costs as he moved his family from the UK to the US for the role and $500,000 paid in June “to account for his unique circumstances.”

Morrell’s role at the company, under the leadership of CEO Bob Chapek, who has since been ousted, focused on heading up Disney’s government affairs and corporate communications. Morrell, an outsider to Disney, had previously worked at BP, the Pentagon, and ABC News.

But during Morrell’s tenure the company faced intense criticism over its response to Florida’s “Don’t Say Gay” law. Disney was slow to respond to the bill despite mounting pressure to denounce it, angering the public and its staff alike, though Chapek ultimately spoke out against it in early March.

This fueled a battle between Disney and Gov. Ron DeSantis, leading to Florida’s legislature voting to strip Disney of the special tax status it had benefitted from since 1967. DeSantis signed the bill repealing the status on April 22.

A week later, Morrell said that he was “resigning from the company to pursue other opportunities.” His role at Disney was “not the right fit for me and not the right move for my family,” he said at the time.

On top of his compensation in 2022, Morrell is eligible for millions more in severance from the company.

Disney said in Tuesday’s filing that Morrell was entitled to $2.5 million in remaining base salary through the end of his employment agreement term, December 2024, and a $1.5 million payment equivalent to a target bonus for fiscal 2022, as long as he completes the terms of his post-employment consulting agreement and general release.

Disney said that Morrell was also entitled to a buyout for the home he purchased in Pasadena, Southern California after taking on the job with a $1.36 million down payment. The home had been purchased by a third-party vendor on the company’s behalf in June at its original sale price and will be sold by Disney.

Disney has previously said that it would pay to ship Morrell’s household goods to Washington, D.C., where he was born and raised and where he has relocated to work for advisory firm Teneo.

Disney and Morrell did not immediately respond to requests for comment from Insider, sent outside normal US working hours.

Home » Audio Sources - Full Text Articles » A Disney executive who left after 3 months amid its ‘Don’t Say Gay’ missteps made almost 0,000 a day
a