Listen to this article
REUTERS | June 1, 20224:14 AM EDT
Sending rocket systems to Kyiv is still under consideration by the Biden administration, but Washington will not send long-range rockets for use beyond the battlefield in Ukraine, White House press secretary Karine Jean-Pierre said on Tuesday.

Russian troops on Wednesday pressed their assault on a factory city they see as key to controlling a swathe of eastern Ukraine, while the United States said it would supply advanced rockets to Kyiv to help it force Moscow to negotiate an end to the war.

Ukraine’s General Staff said Russian forces, now 98 days into their invasion, were also pounding targets including key infrastructure in other eastern and southern areas, including the city of Sievierodonetsk, an industrial centre that has been the main focus of Russia’s offensive in recent days.

President Joe Biden announced the supply of advanced rocket systems and munitions that could strike with precision at long-range Russian targets as part of a $700 million weapons package expected to be unveiled on Wednesday. read more

“We have moved quickly to send Ukraine a significant amount of weaponry and ammunition so it can fight on the battlefield and be in the strongest possible position at the negotiating table,” Biden wrote in an opinion piece in the New York Times.

A senior Biden administration official said the new supplies – which comes on top of billions of dollars worth of other equipment such as drones and anti-aircraft missiles – included the M142 High Mobility Artillery Rocket System (HIMARS), which Kyiv has said is “crucial” to counter Russian missile attacks.

Addressing concerns that such weapons could draw the United States into direct conflict, senior administration officials said Ukraine gave assurances the missiles would not be used to strike inside Russia.

“These systems will be used by the Ukrainians to repel Russian advances on Ukrainian territory, but they will not be used on targets in Russian territory,” one U.S. official said.

Shortly after the U.S. decision was announced, the Russian defence ministry said Russia’s nuclear forces were holding drills in the Ivanovo province, northeast of Moscow, the Interfax news agency reported.

Some 1,000 servicemen were exercising in intense manoeuvres using more than 100 vehicles including Yars intercontinental ballistic missile launchers, it cited the ministry as saying. read more

There was no mention of the U.S. decision to supply new weapons in the Interfax report.

Ukraine’s General Staff said Russian forces continued to pound northern, southern and eastern districts of the city of Sievierodonetsk in Luhansk, one of two provinces in the eastern Donbas region that Moscow claims on behalf of separatists.

If Russia captures Sievierodonetsk, and its smaller twin Lysychansk on the higher west bank of the Siverskyi Donets river, it will hold all of Luhansk, a key war aim of President Vladimir Putin’s forces.

The city has now been largely reduced to rubble, with nearly all critical infrastructure destroyed and 60% of residential property damaged beyond repair, regional governor Serhiy Gaidai said on Tuesday. Russian shelling has made it impossible to deliver aid or evacuate people, he added.

Britain’s defence ministry said in its latest intelligence bulletin that Russian forces including Chechen fighters now controlled more than half of Sievierodonetsk after two days of intense street fighting.

The leader of the pro-Moscow Luhansk People’s Republic, Leonid Pasechnik, told TASS news agency that Russian proxies had advanced slower than expected to “maintain the city’s infrastructure” and exercise caution around its chemical factories.

Gaidai warned Sievierodonetsk residents not to leave bomb shelters due to what he said was a Russian air strike on a nitric acid tank. The Luhansk People’s Republic’s police force accused Ukraine’s forces of damaging it. read more

Jan Egeland, secretary general of the Norwegian Refugee Council aid agency which had long operated out of Sievierodonetsk, said he was “horrified” by its destruction.

Up to 12,000 civilians remain caught in crossfire, without sufficient access to water, food, medicine or electricity, Egeland said.

“The near-constant bombardment is forcing civilians to seek refuge in bomb shelters and basements, with only few precious opportunities for those trying to escape,” he said.

Ukraine says weapons sent by the United States and other countries since the beginning of the invasion have helped fend off Russian gains.

Ukrainian President Volodymyr Zelenskiy has called for more weapons while lambasting the European Union, which agreed on Monday to cut imports of Russian oil, for not sanctioning energy from Russia sooner.

The EU said it would ban imports of Russian oil by sea. Officials said that would halt two-thirds of Russia’s oil exports to Europe at first, and 90% by the end of this year. read more

Responding to the EU oil embargo, Russia widened its gas cuts to Europe, pushing up prices and ratcheted up its economic battle with Brussels. read more

Putin launched his “special operation” on Feb. 24 to disarm and “denazify” Ukraine. Ukraine and its Western allies call this a baseless pretext for a war to seize territory. 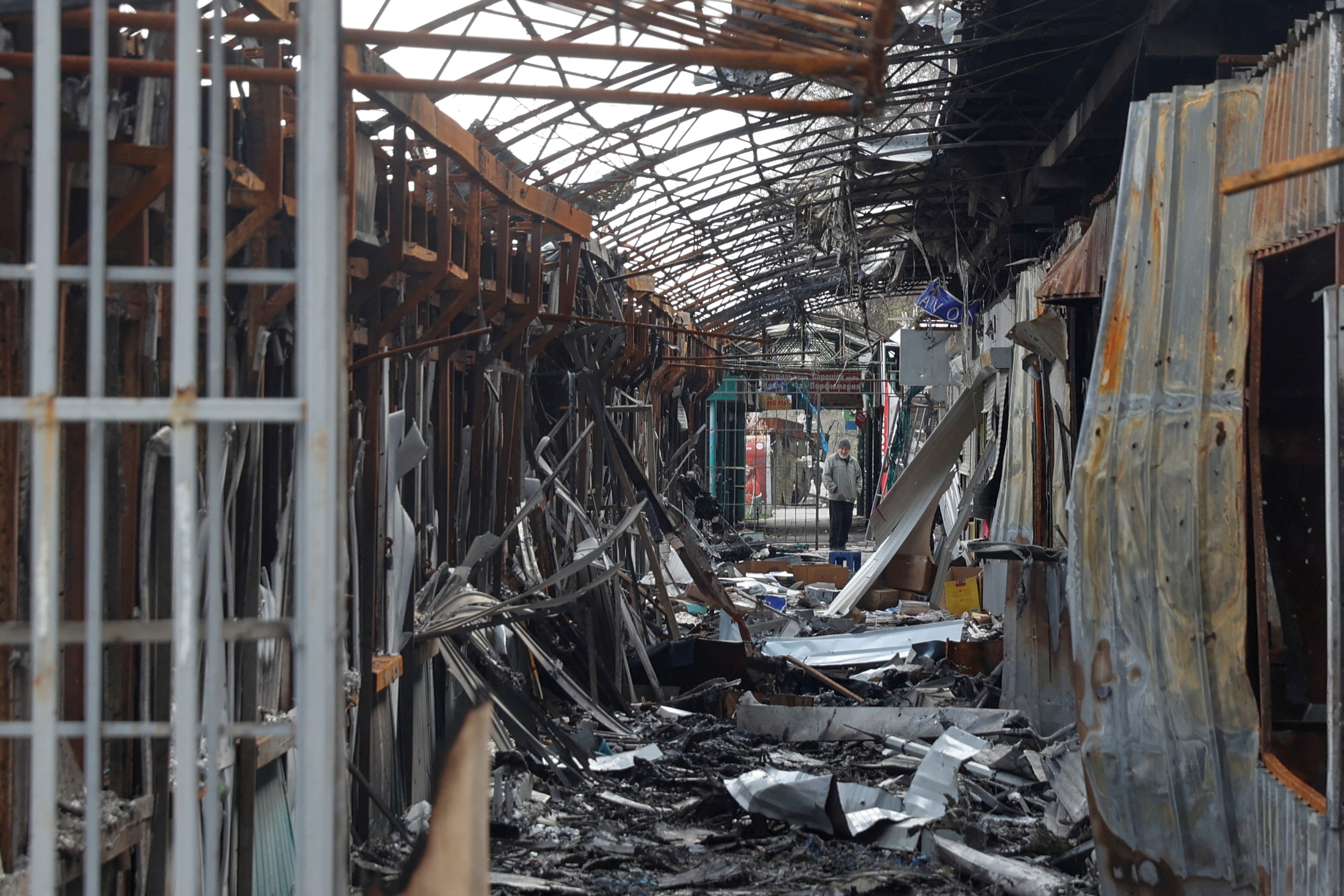 A local resident stands next to debris of an open market destroyed by a military strike, as Russia’s attack on Ukraine continues, in Sievierodonetsk, Luhansk region, Ukraine April 16, 2022. REUTERS/Serhii Nuzhnenko/File Photo 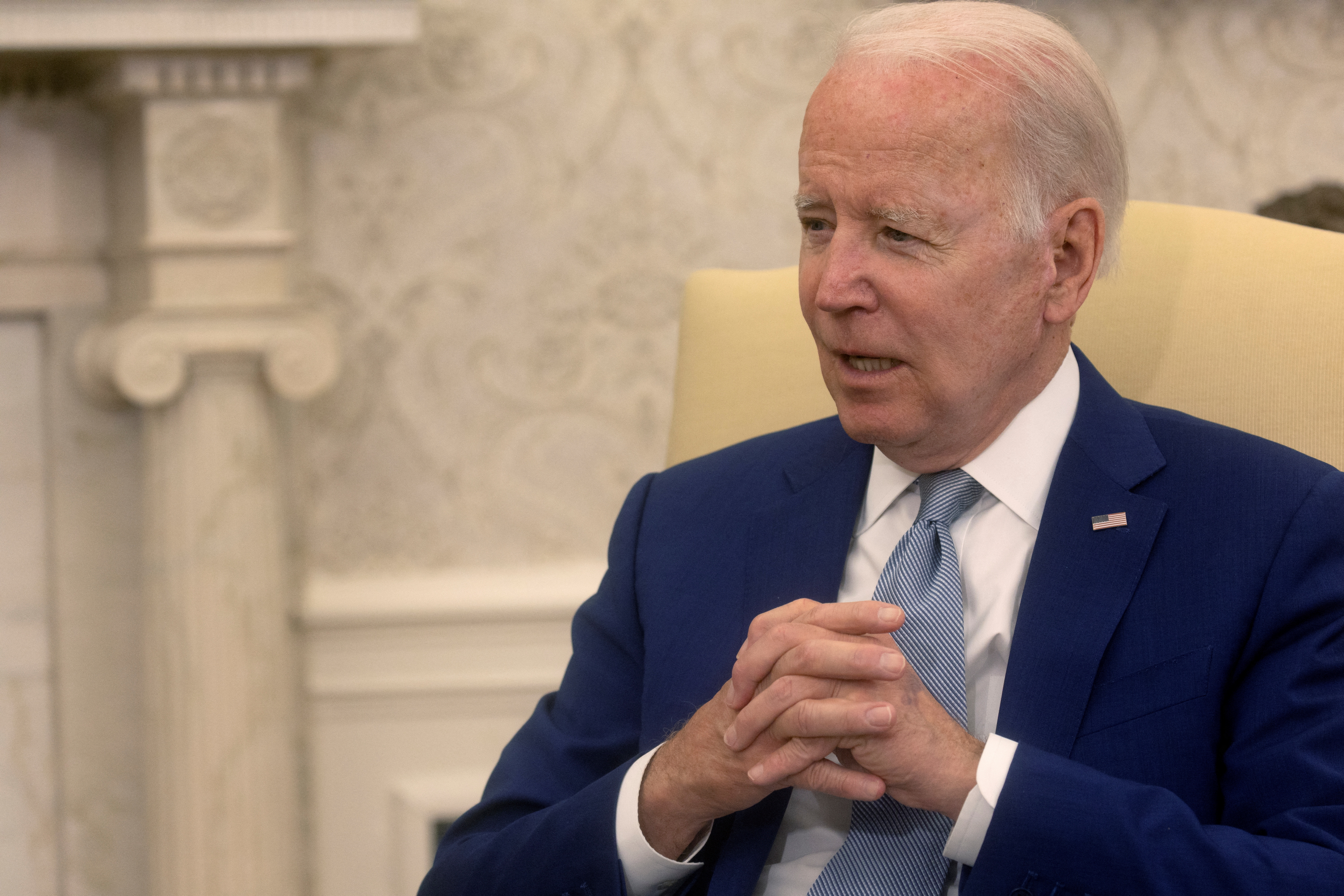 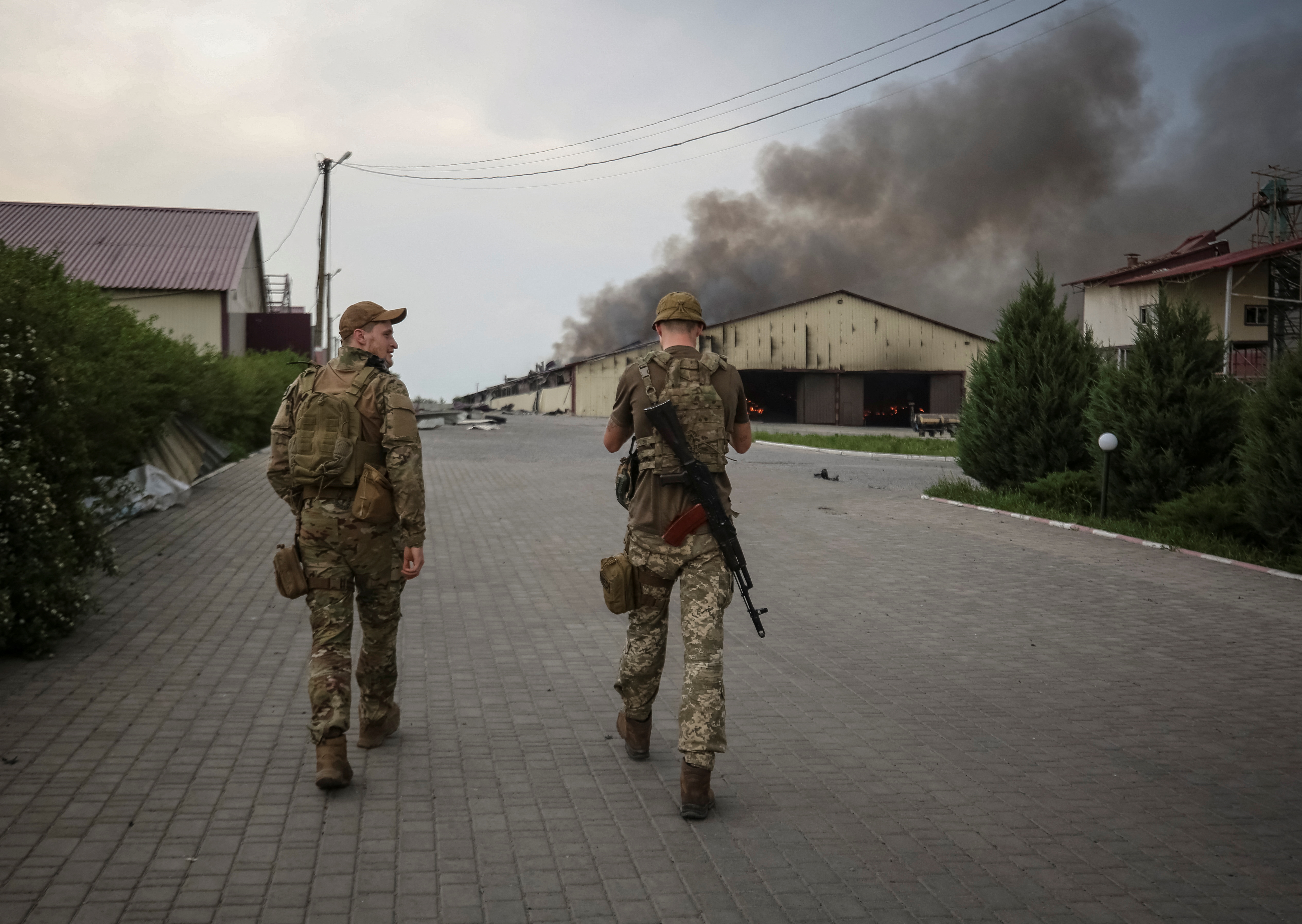 Ukrainian servicemen walk as seeds burn in a grain silos after it was shelled repeatedly, amid Russia’s invasion of Ukraine, in Donetsk region, Ukraine May 31, 2022. REUTERS/Serhii Nuzhnenko 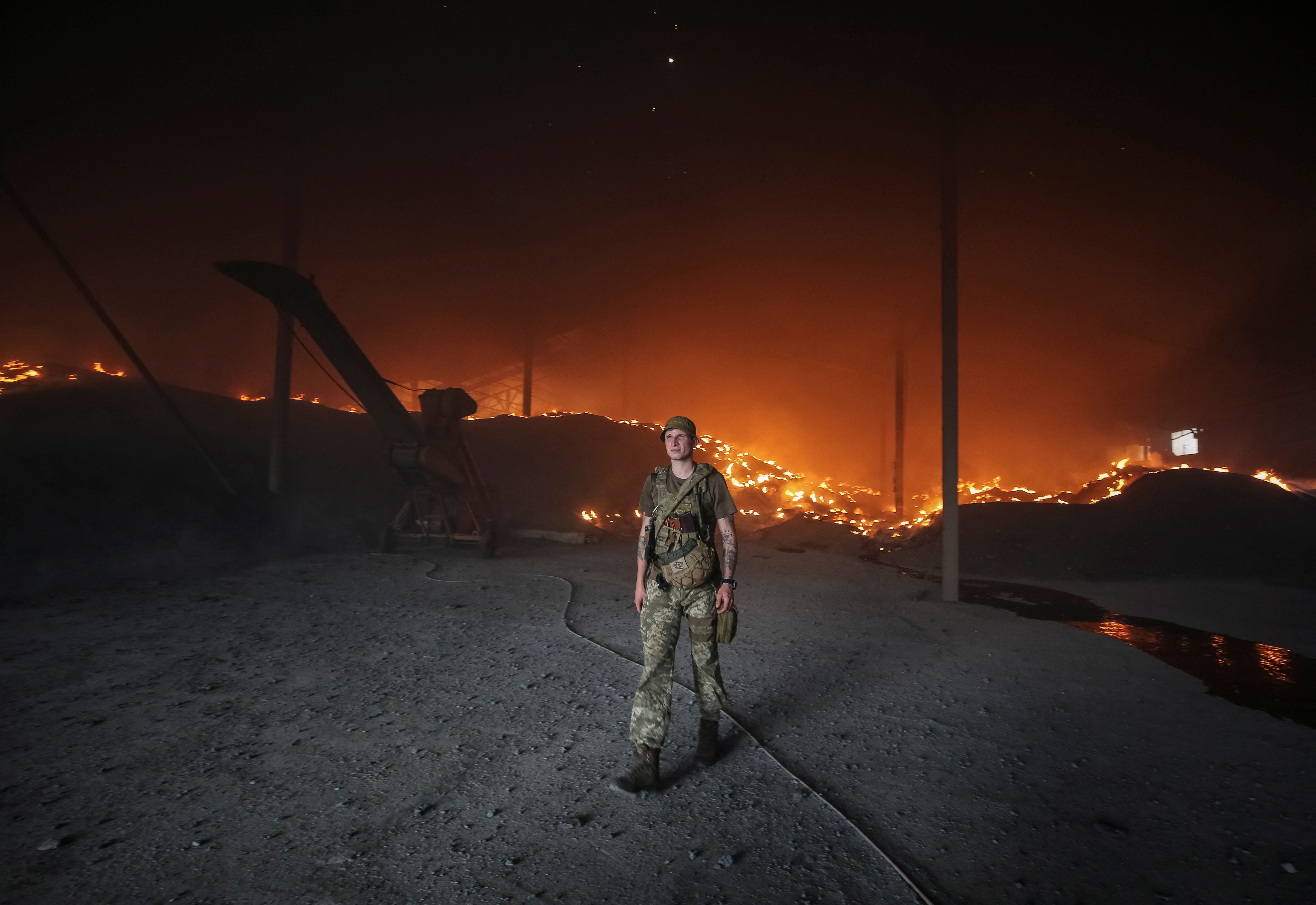 A Ukrainian serviceman walks as seeds burn in a grain silos after it was shelled repeatedly, amid Russia’s invasion of Ukraine, in Donetsk region, Ukraine May 31, 2022. REUTERS/Serhii Nuzhnenko