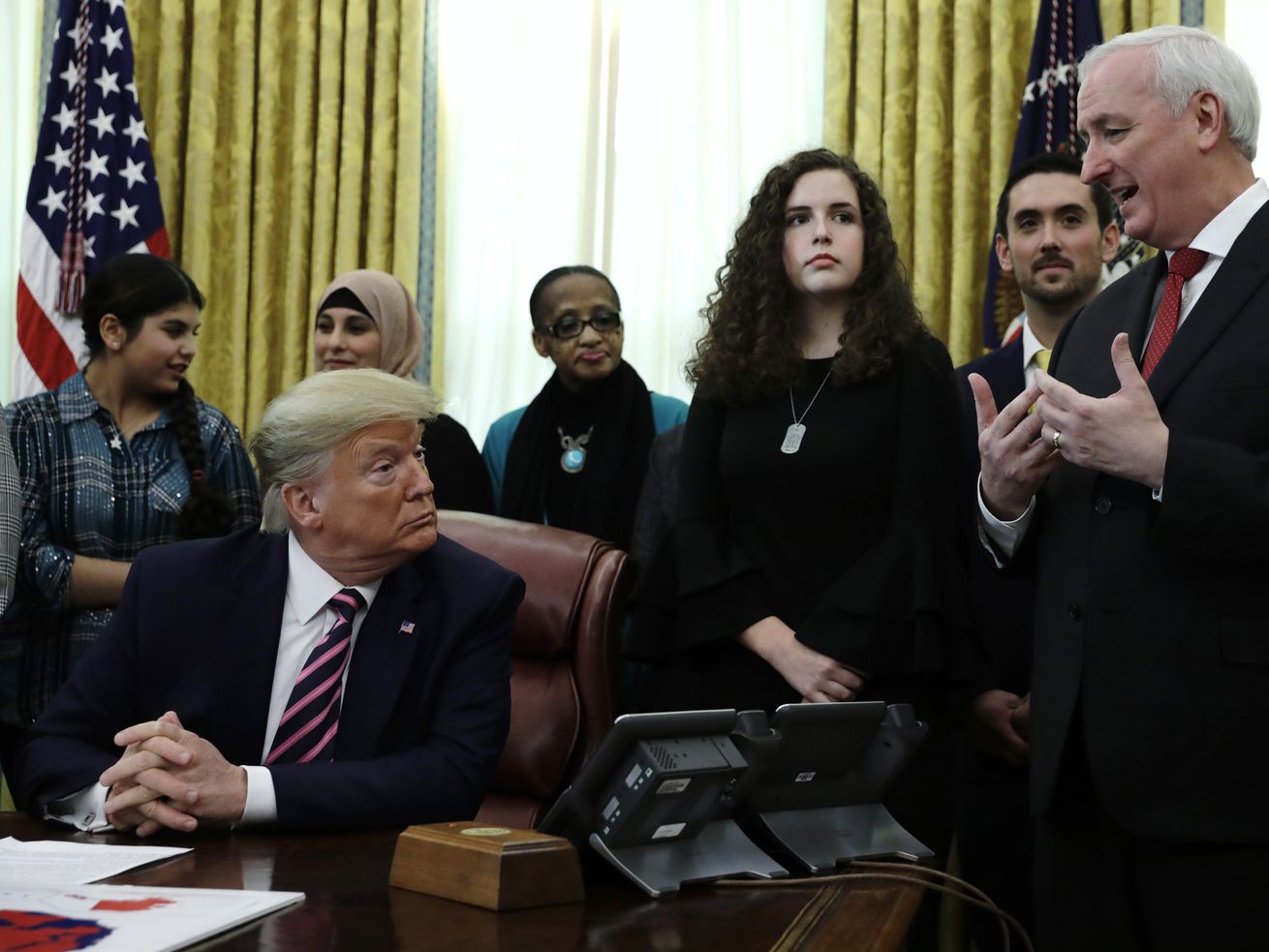 The report of more interference efforts come as the Senate makes plans for its impeachment trial.

In the final weeks of his presidency, former President Donald Trump attempted to overturn state election results in Georgia by pressuring officials to “find” votes for him. And according to a new report from the New York Times, Trump’s efforts extended beyond that: He also contemplated replacing the acting US attorney general with one more sympathetic to his efforts to force a change in the Georgia results.

The Times’ Katie Benner reports that Trump and Jeffrey Clark, a Department of Justice lawyer in charge of the civil division, devised a plan that would have seen the Department of Justice working to improperly keep Trump in office by replacing acting attorney general Jeffrey Rosen, who had refused to go along with Trump’s attempts to undermine election results, with Clark.

A rash of DOJ officials, briefed on the plan via conference call on January 3, threatened to resign if that occurred, according to the Times report. That threat, along with a contentious meeting between Rosen, Clark, and Trump in which each DOJ official made their case to the president reportedly dissuaded Trump from replacing Rosen in the end.

But had the effort gone ahead, the Justice Department would have likely become embroiled in the effort to overturn the election, giving it a legitimacy and legal backing it had failed to gain, following the failure of dozens of lawsuits that falsely alleged election irregularities.

One former Justice Department official called the effort to replace Rosen “an attempted coup at the Justice Dept. — fomented by the President of the United States” on Twitter Friday.

For his part, Clark has denied that any plan to fire Rosen existed, and told the Times that he had merely provided counsel to the president.

“My practice is to rely on sworn testimony to assess disputed factual claims,” he said. “There was a candid discussion of options and pros and cons with the president. It is unfortunate that those who were part of a privileged legal conversation would comment in public about such internal deliberations, while also distorting any discussions.”

Changing the leadership of the DOJ would have been among the last attempts by Trump to overturn the election. Beyond his unsuccessful court challenges in battleground states, Trump had also previously tried to harness the power of the DOJ by asking Rosen to investigate Dominion Voting Systems, a company that makes voting equipment and software, and that has been the subject of false claims of vote tampering. The former president also requested the Justice Department to support his campaign’s state-level lawsuits, and was denied.

Trump further asked Rosen to appoint special counsels to carry out investigations into disproved claims of voter fraud, which Rosen declined to do. Rosen affirmed his predecessor former Attorney General William Barr’s findings that claims of widespread voter fraud were not supported by evidence.

And in one of the most shocking and brazen efforts, Trump called Georgia Secretary of State Brad Raffensperger to ask him to “find” enough votes to overturn President Joe Biden’s narrow margin of victory, even after it was affirmed through two recounts. That call reportedly took place on the same day that Trump had the newly-uncovered conversations with DOJ officials.

These efforts ultimately culminated in a rally in Washington, DC on January 6, during which Trump repeated his false claims about there being irregularities with the election — and during which he whipped up a crowd that later stormed the US Capitol, leading to his second impeachment.

Trump was impeached on January 13 in the House for alleged “incitement of insurrection.” The article of impeachment also argues that Trump “betrayed his trust as President” in attempting to coerce officials to back his efforts to overturn the election, as he reportedly did with Rosen. If he is found guilty of these crimes in the Senate, Trump could be barred from holding public office again.

On Friday, Senate leaders finally hammered out a deal to begin that trial on February 9. This came after debate over start time — with Democrats worried that beginning the trial immediately would delay the confirmations of many of Biden’s appointees, and Republicans wanting Trump to have an extended period of time to ready his defense.

The House will deliver the article to the Senate on Monday, and senators will be sworn in as jurors Tuesday, but oral arguments won’t begin on February 9, and leaders have signaled that they hope to reach a verdict by the end of that week.

By delaying the start by two weeks, Biden’s administration will be able to prioritize Covid-19 relief and confirming Cabinet posts, Schumer said Friday. And a spokesperson for McConnell said the delay gave Trump adequate due process.

Trump has begun assembling his defense team. His longtime attorney Rudy Giuliani, who led Trump’s failed attempts to overturn election results in the courts, will not be on it; last week, he said he could not act as attorney because he was a witness to the January 6 rally.

Instead, South Carolina attorney Karl “Butch” Bowers, Jr., will head up Trump’s legal team. Bowers works for a small firm in Columbia, South Carolina, and has been described as a more measured figure than the bombastic Giuliani. Bowers previously successfully defended former South Carolina Gov. Mark Sanford in his own 2009 impeachment hearing, after Sanford’s extramarital affair came to light.