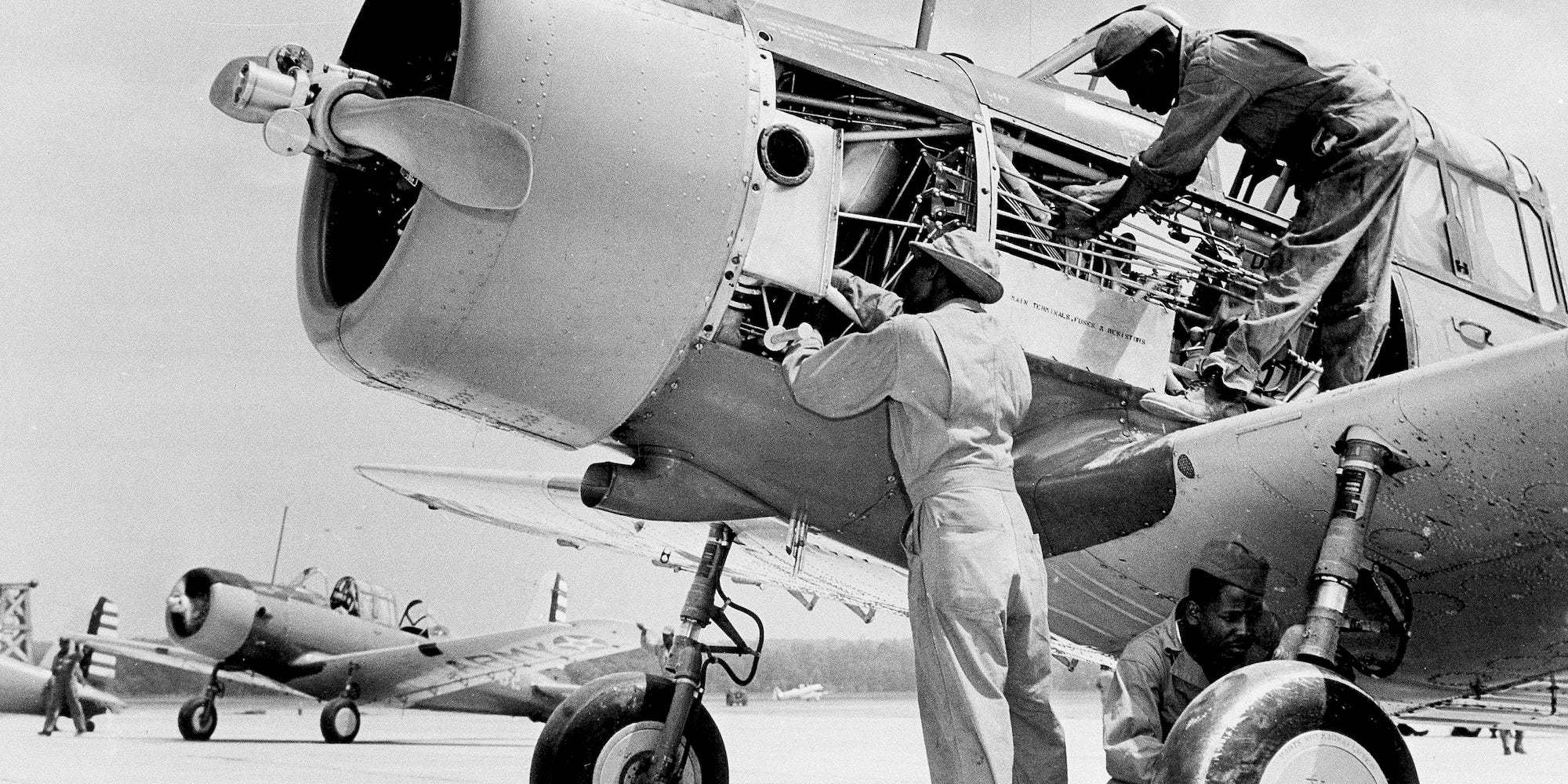 Airplane mechanics of the 99th Pursuit Squadron inspect the engine of a BT-13 Valiant trainer aircraft at US Army flying school in Tuskegee Alabama.

In 1941, the US military designated Tuskegee, Alabama, as the training ground for African-American pilots. 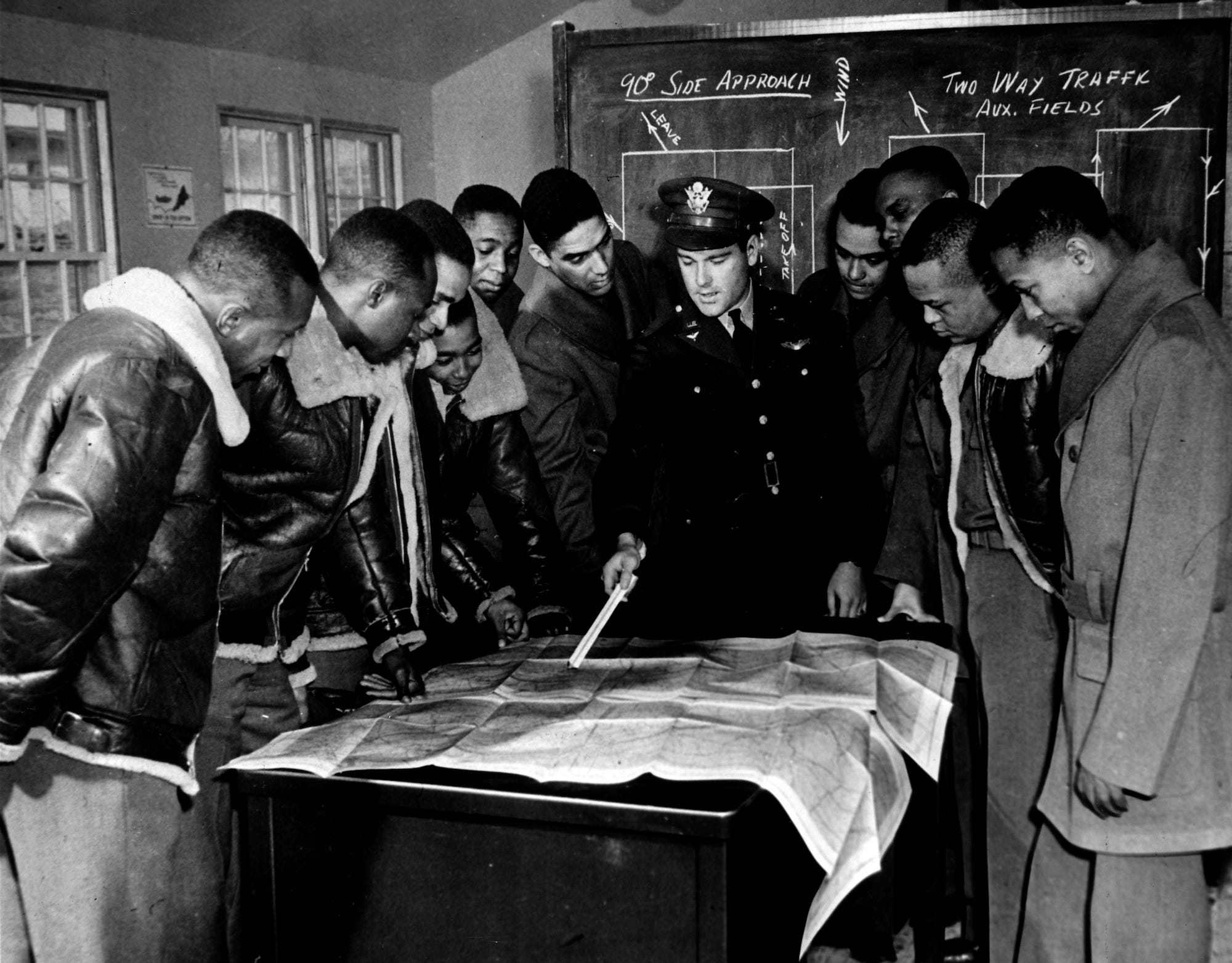 Tuskegee Airmen, as cadets, look at a flight map during a training class in 1942.

Before 1940, Black Americans were barred from flying for the military due to the racist belief that they were “inferior” to whites.

The US Army published a study in 1925 called “The Use of Negro Manpower in War,” which was later used to support segregation.

Though they were finally able to become US military pilots, Black Americans trained in segregated facilities. 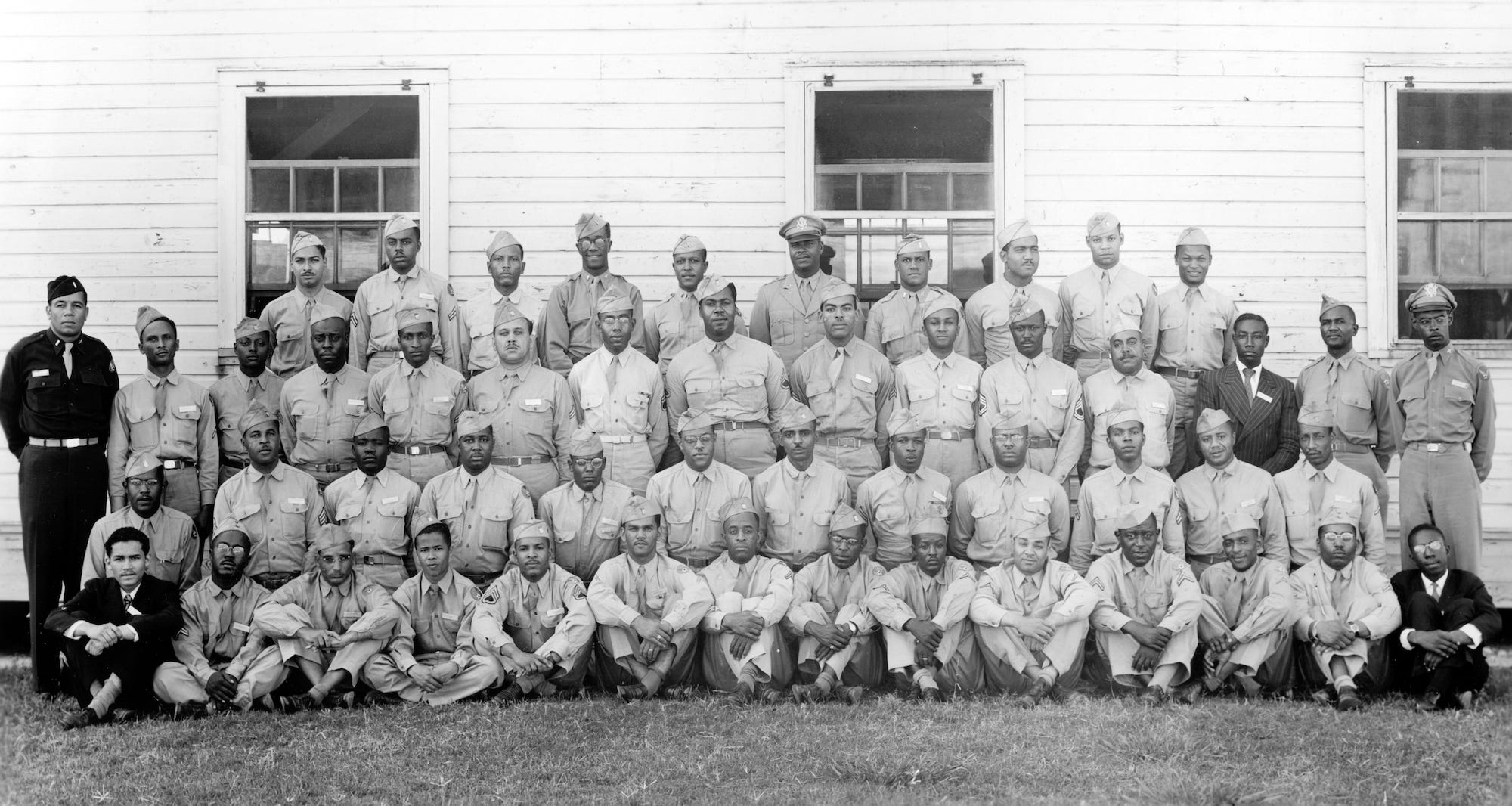 A graduating class of Tuskegee Airmen during World War II. 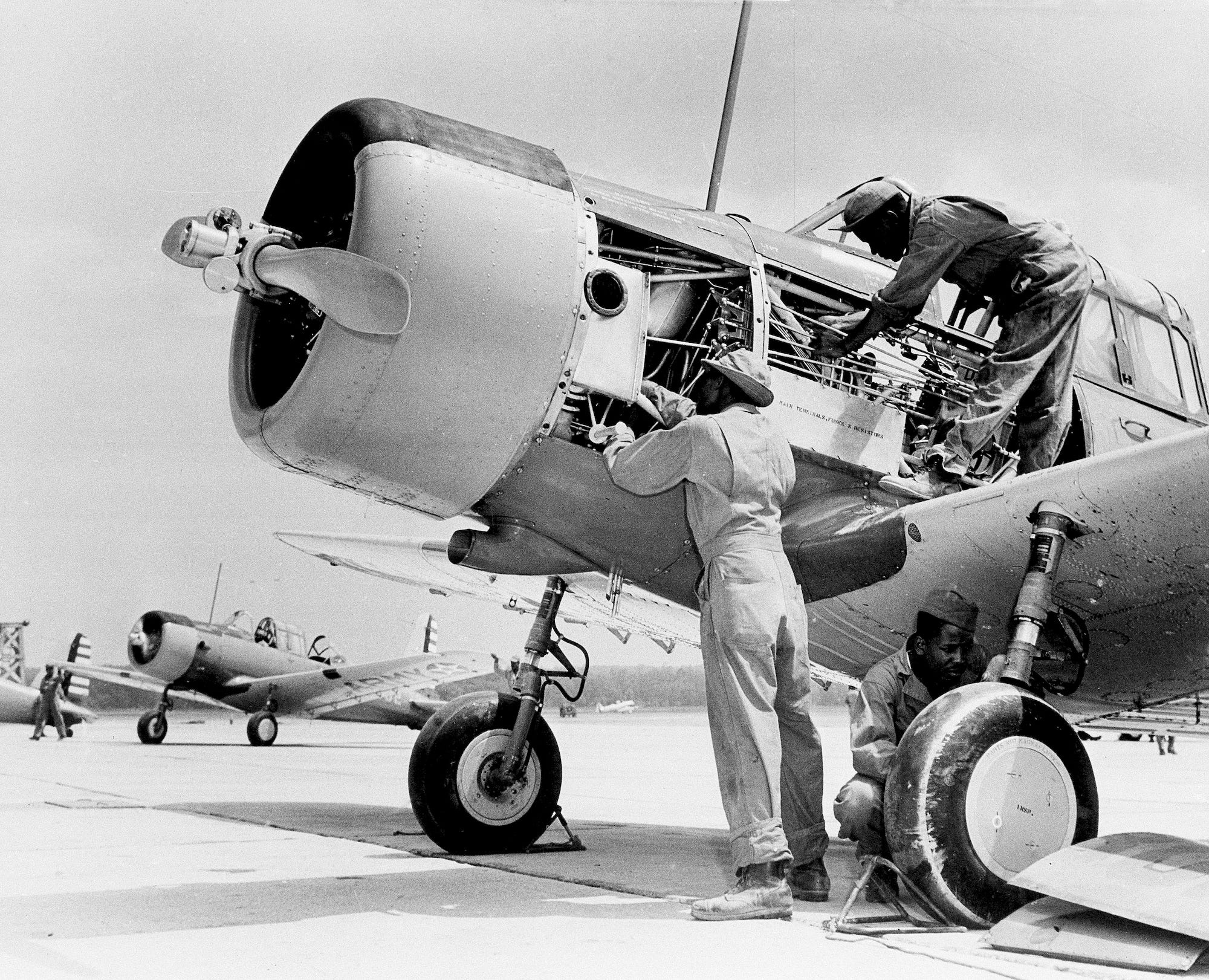 Mechanics from the 99th Pursuit Squadron inspect the engine of a BT-13 Valiant trainer aircraft at US Army flying school in Tuskegee, Alabama.

The first class of pilots graduated in March 1942. 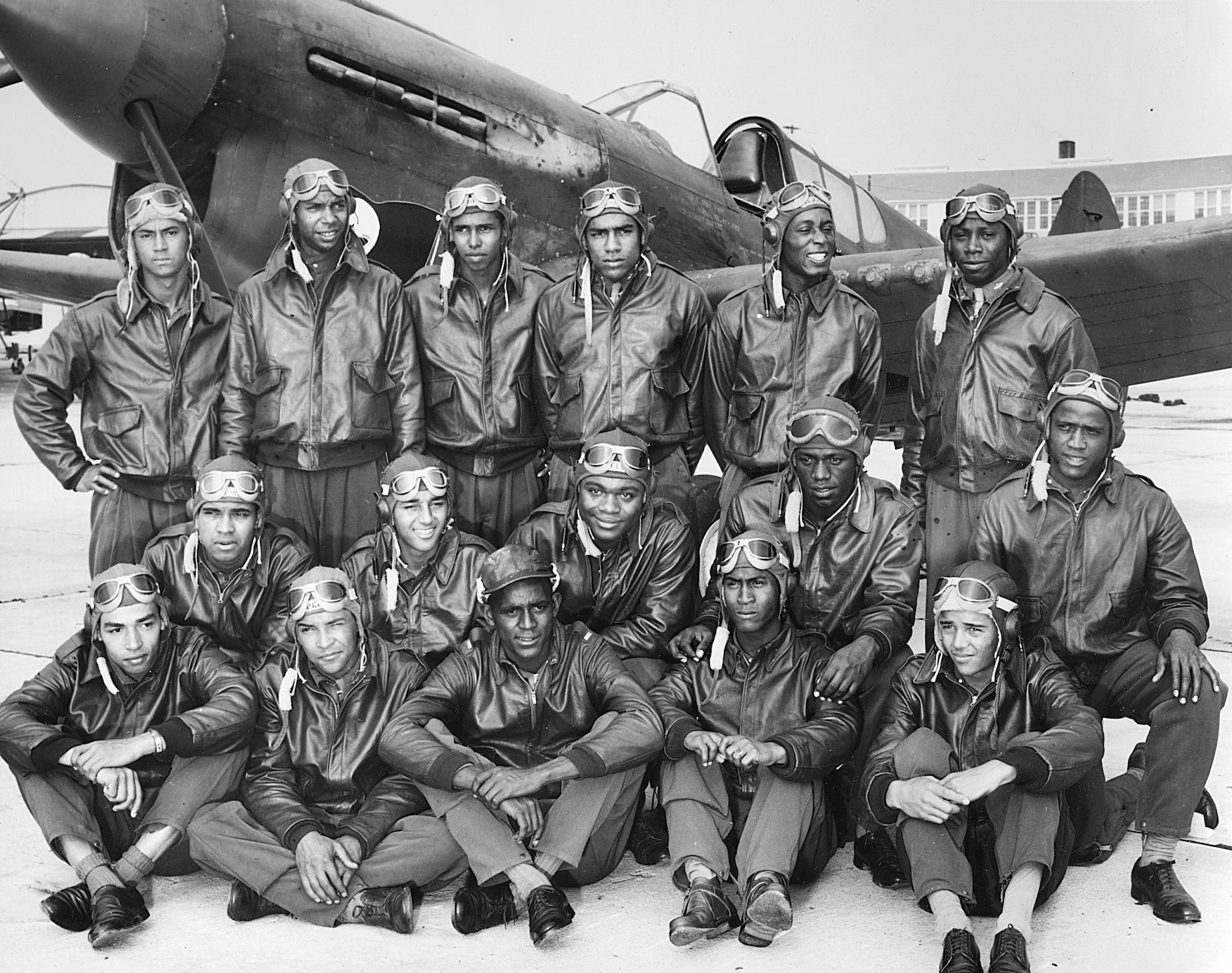 Davis was assigned to the base; the others became the first African-American pilots in the 99th Pursuit Squadron.

The 99th Pursuit Squadron was an all African-American squadron, and these trailblazers would soon face Axis fighters in the European theater and racist assessments by white officers that these new airmen were somehow less capable.

The Tuskegee Airmen were highly successful during the war, escorting medium and heavy bombers on missions over Italy and Germany. 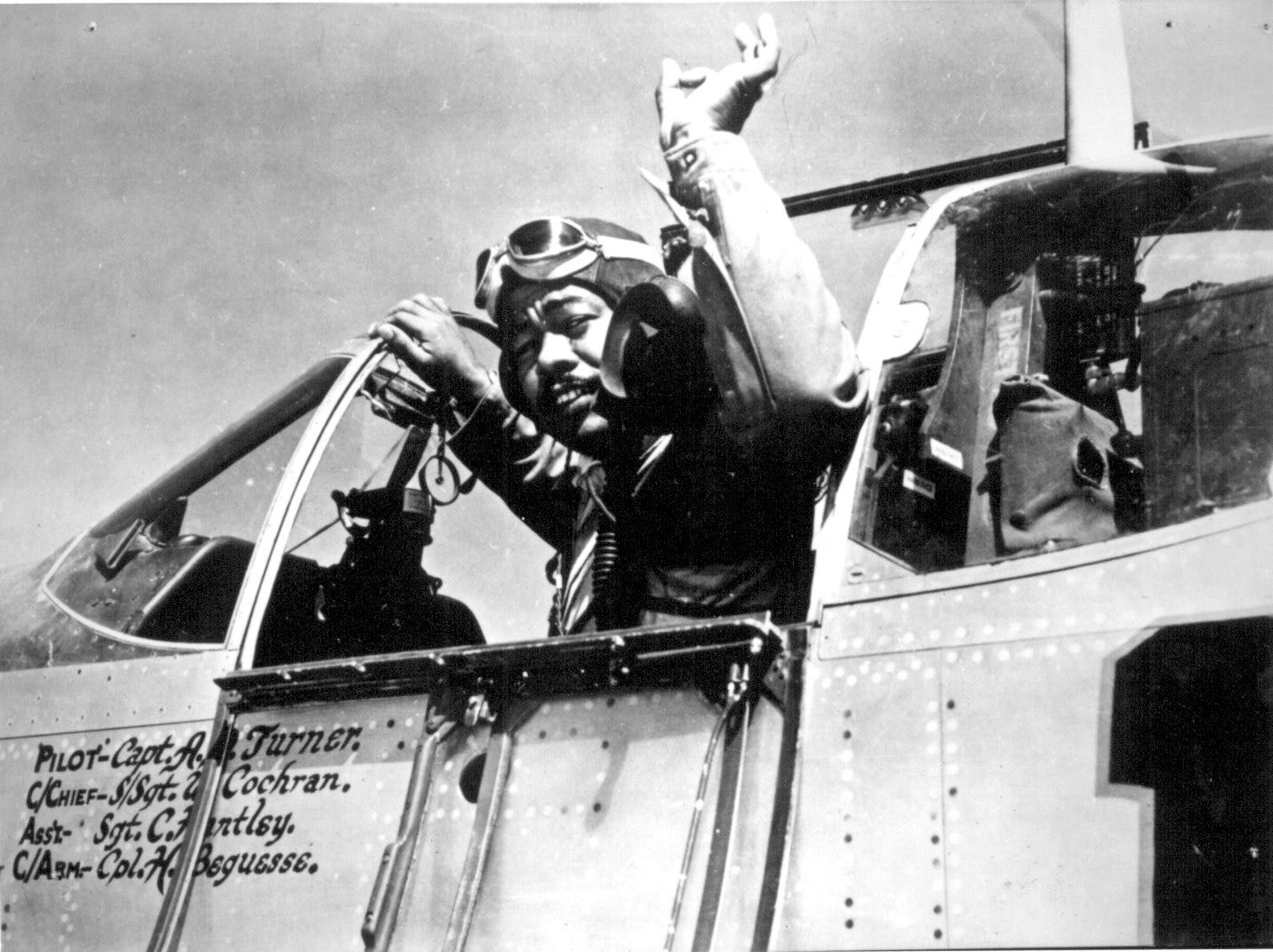 Capt. Andrew D. Turner signals to his ground crew before taking off from his base in Italy to escort heavy bombers en route to enemy targets during World War II.

US Army via Wikimedia Commons 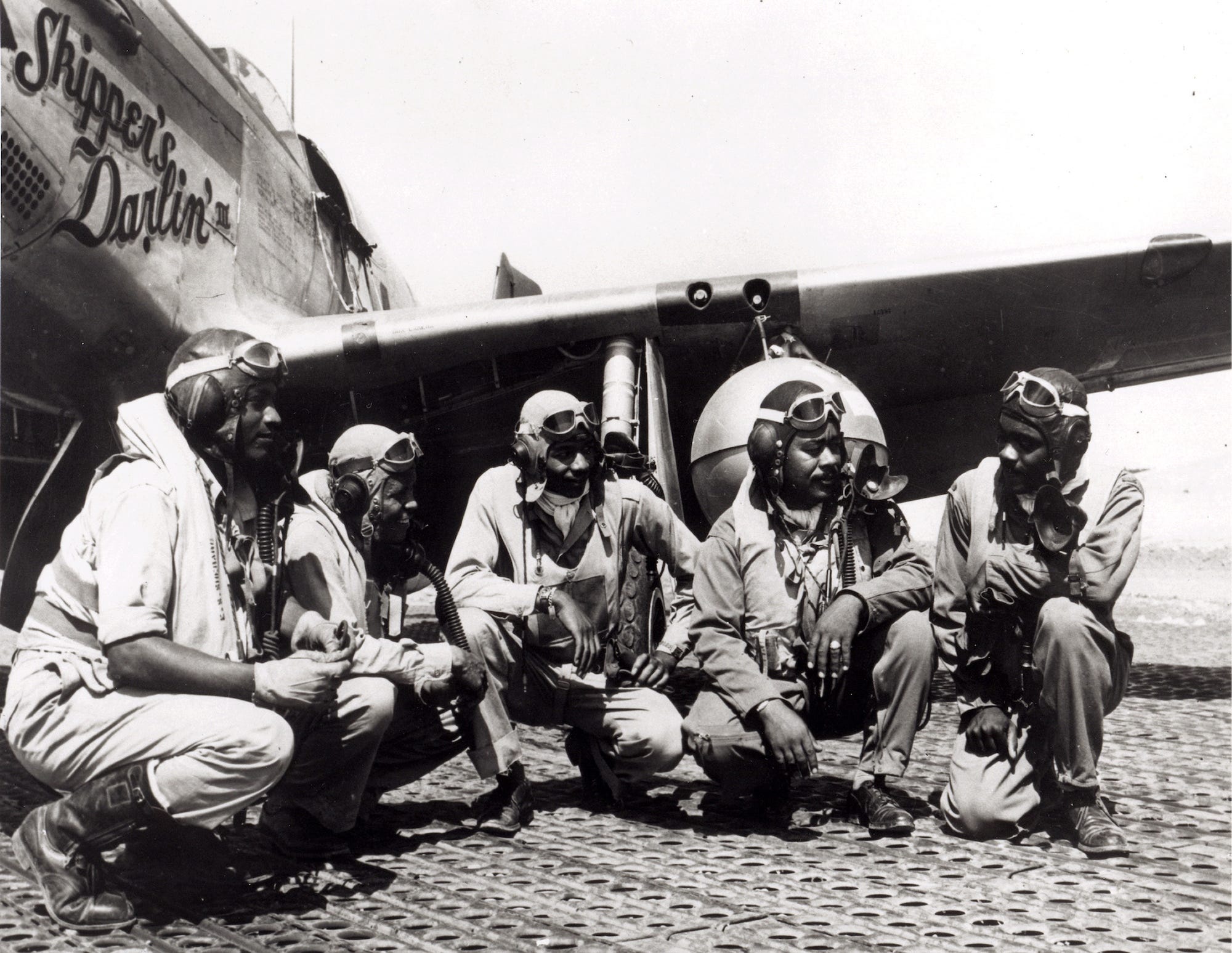 Pilots with a P-51 Mustang Group from the 15th Air Force in Italy talk in the shadows of one of their aircraft, August 1944.

Members of the 99th Fighter Squadron covered the landings of Allied troops in Licata and Anzio, Italy.

The 99th also provided cover for Allied naval vessels in the Mediterranean Sea. 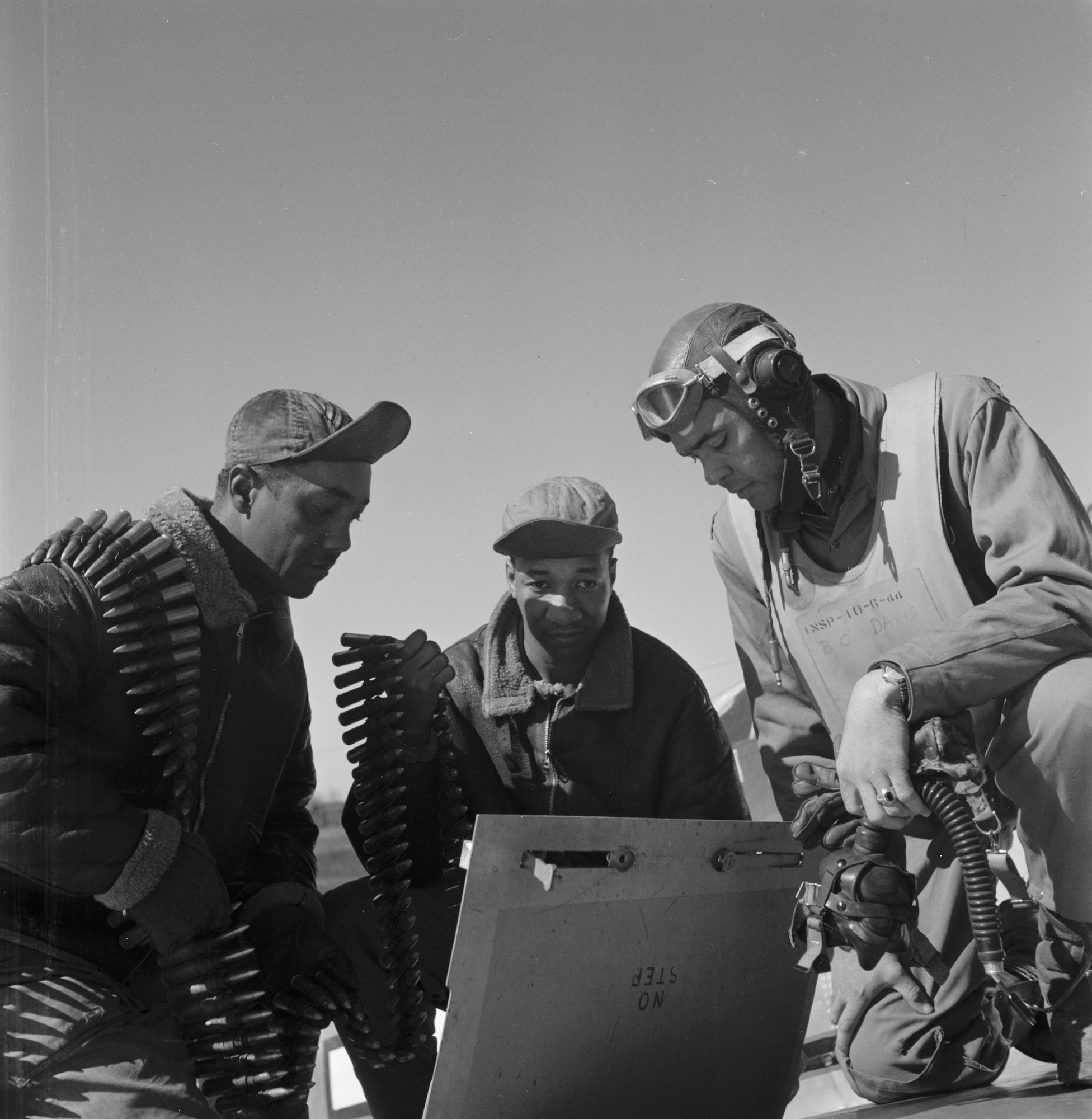 Originally flying out of Tunisia, the pilots later flew out of Sicily before eventually launching missions from mainland Italy. 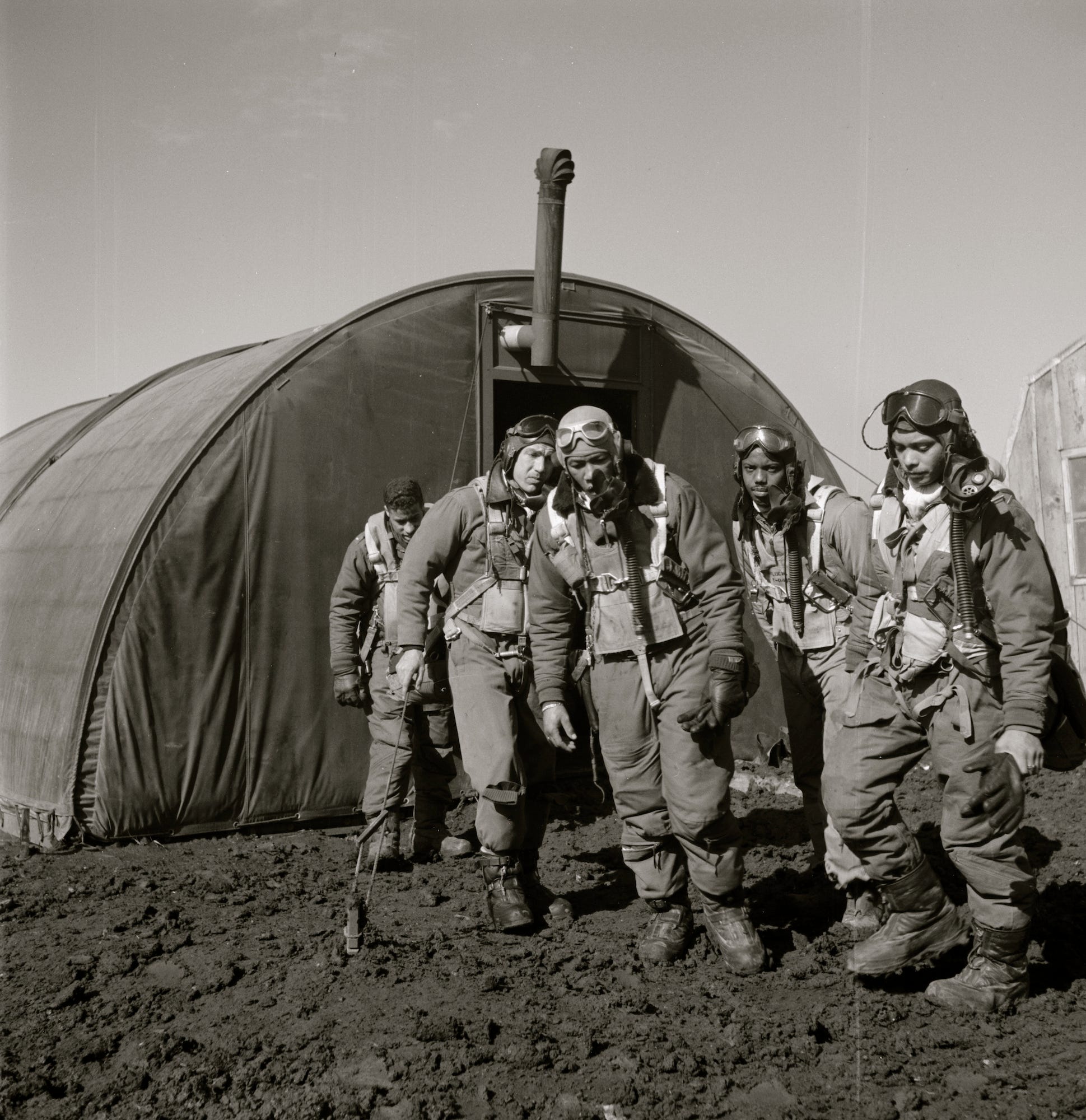 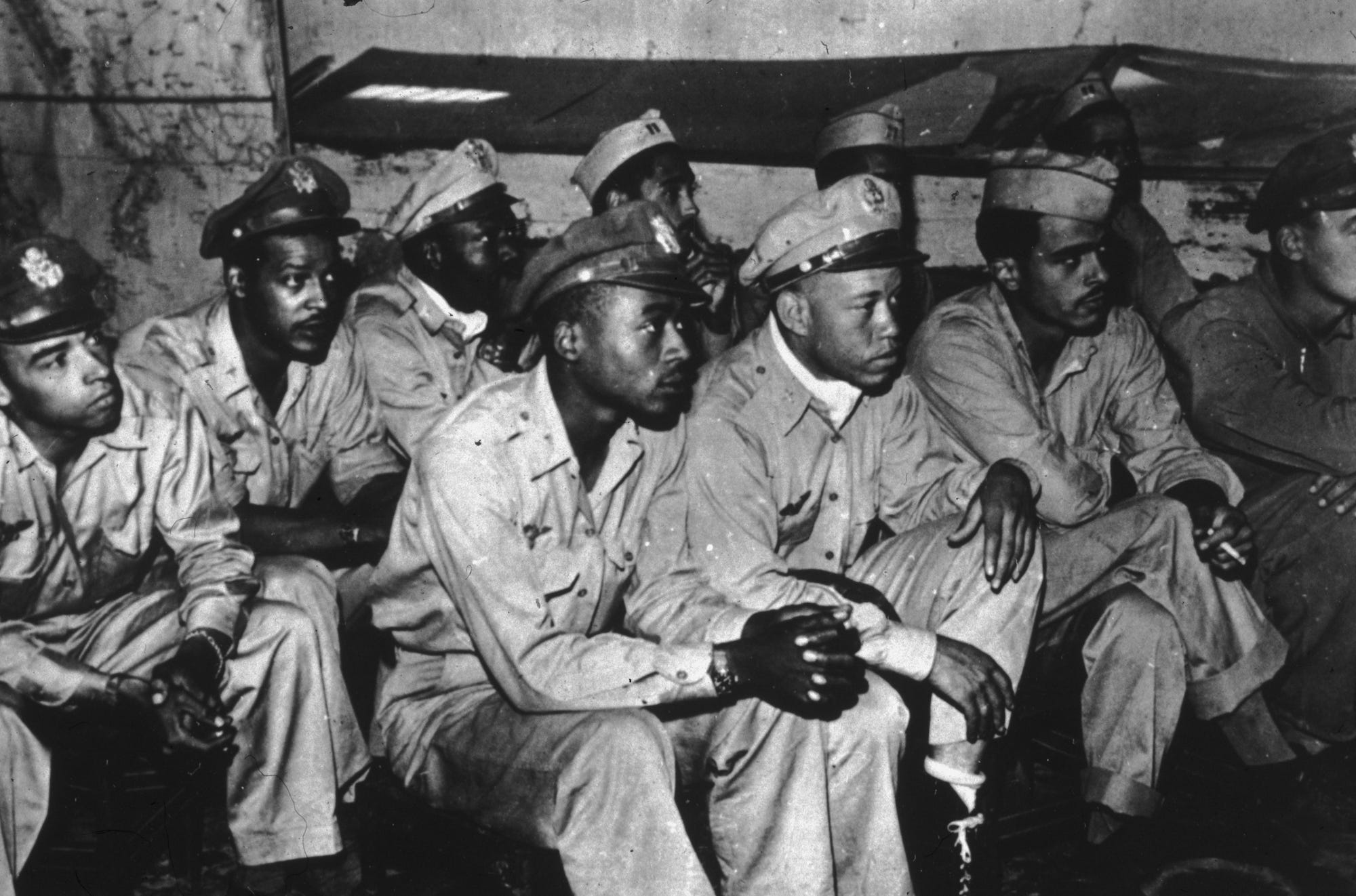 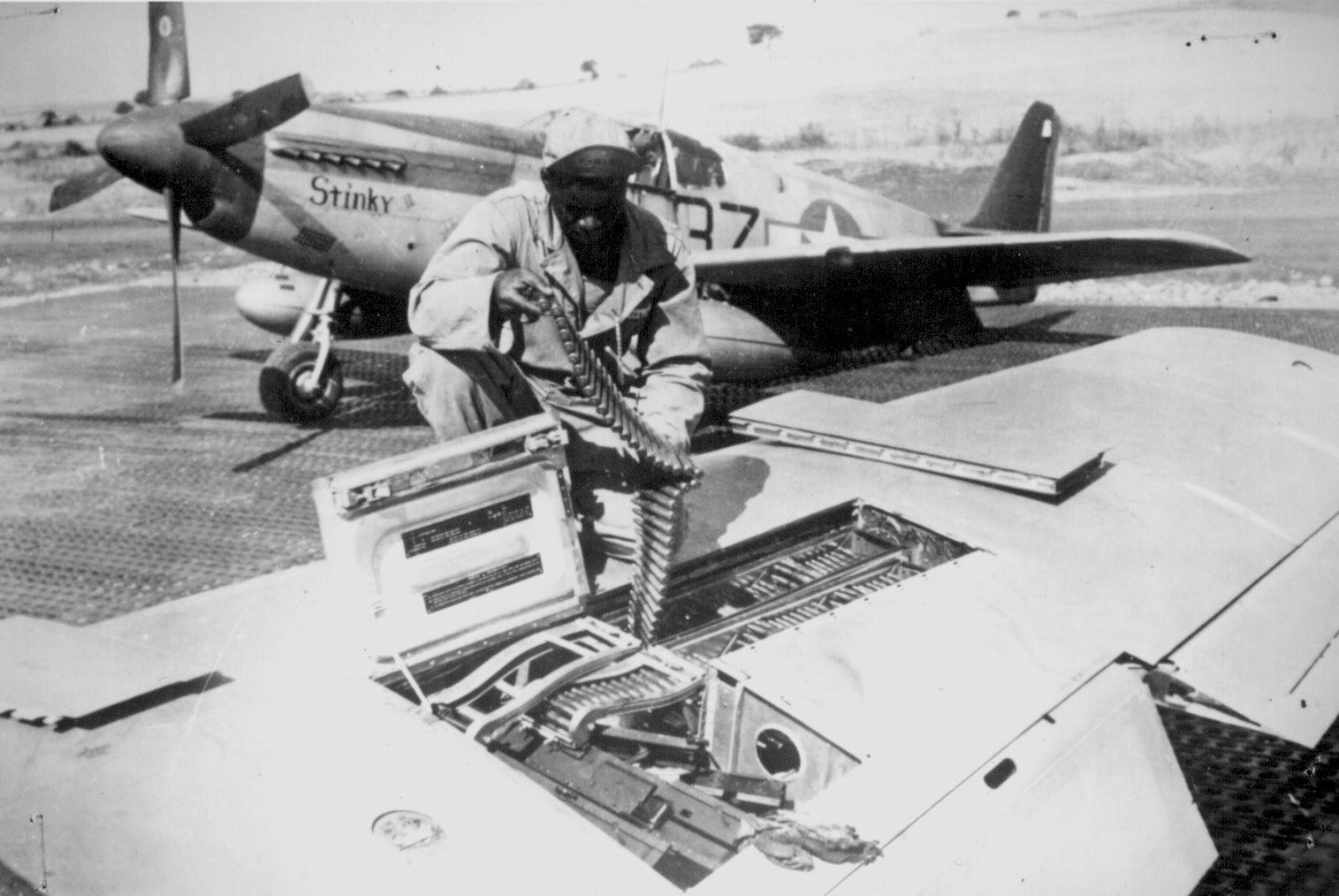 A US Army Air Force armorer with the 100th fighter squadron checks ammunition belts for the P-51 Mustang’s machine guns before it leaves for a mission against German targets in September 1944.

White officers in the unit’s chain of command wrote memorandums questioning the unit’s combat successes and recommended the 99th no longer be deployed for combat missions.

The War Department — now the US Department of Defense — kept the unit in combat but attached it to another command, and perceptions of the unit improved.

Here are insignia for various squadrons on an AY-6 Texan aircraft during a 2012 ceremony honoring Tuskegee Airmen. The top emblem is for the 332nd Fighter Group. The unit insignia, from left to right, are for the 99th, 100th, 301st and 302nd Fighter Squadrons. 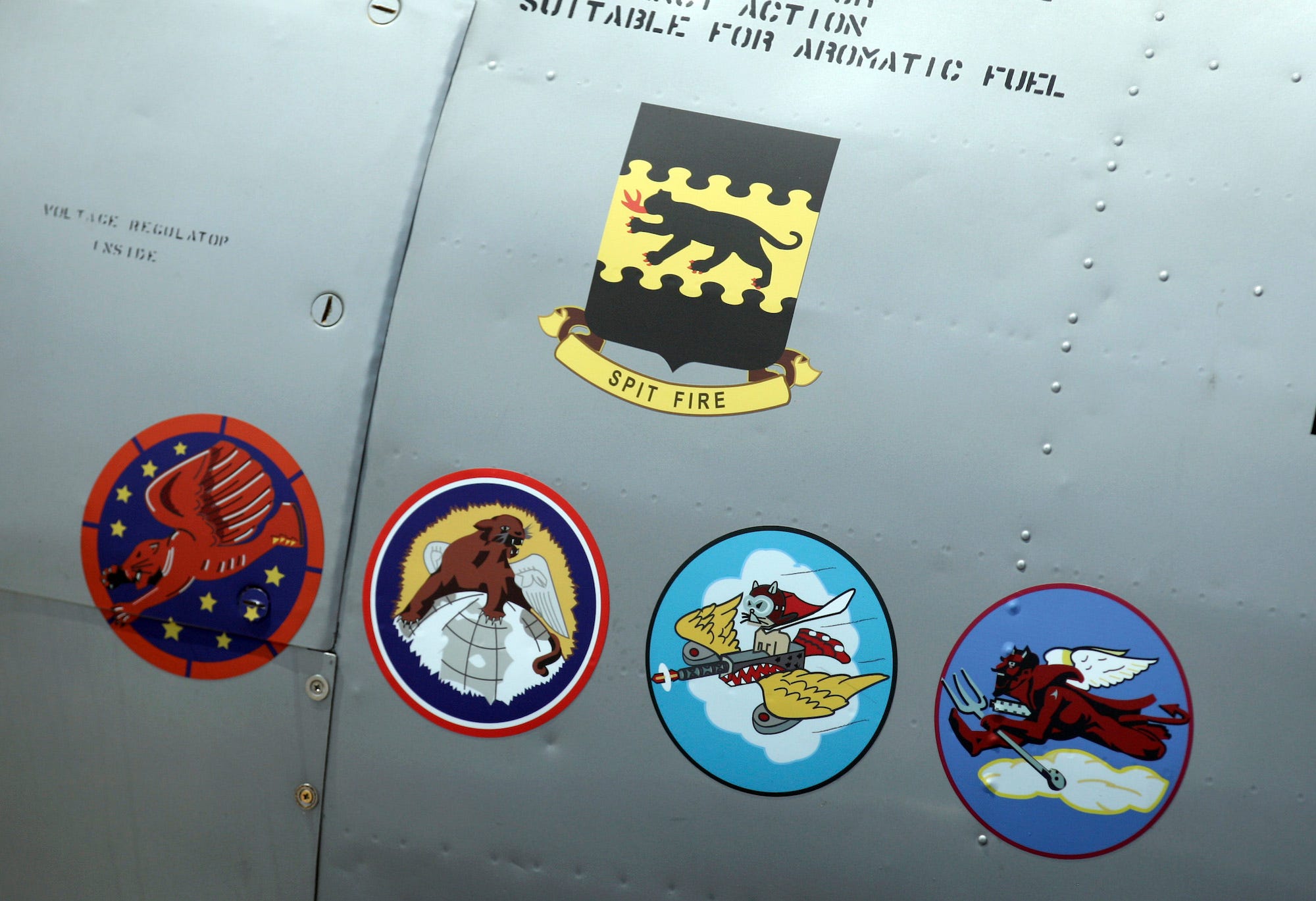 Insignia for five Tuskegee Airmen Squadrons seen on the side of a Tuskegee Army Airfield AY-6 Texan plane to honor the airmen during a ceremony in 2012.

In September 2018, the Air Force flew a formation honoring past, present, and future Tuskegee Airmen. 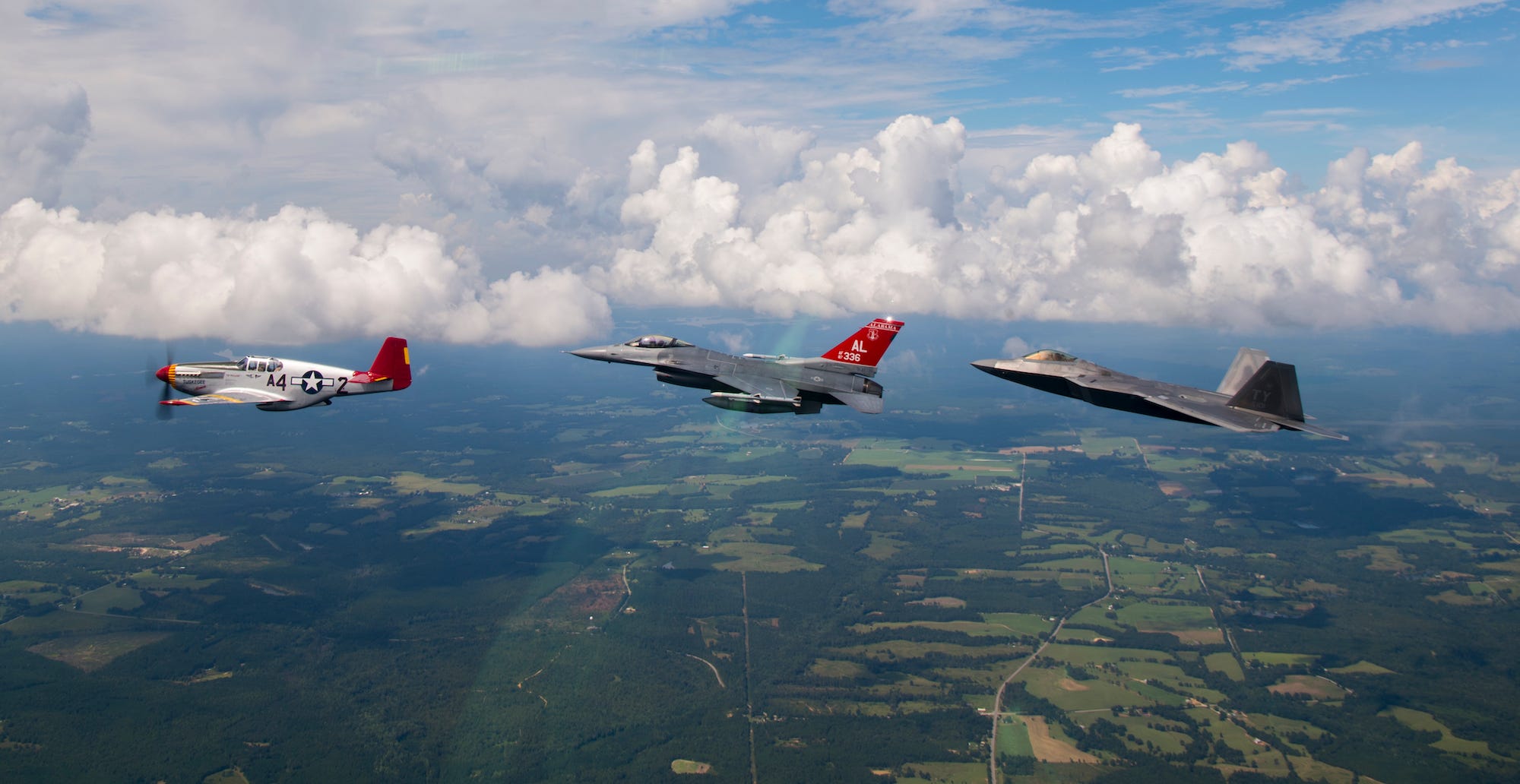 A commemorative P-51 Mustang, F-16 Fighting Falcon, and F-22 Raptor flying in formation to honor Tuskegee Airmen of past, present, and future, September 2018.